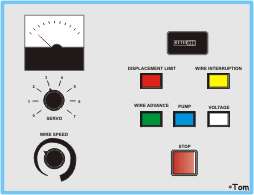 The Front panel of the STM-D

The first generator, named STM-D, was a relaxation generator, adapted from a tabletop ram-type machine for the needs of the DEM-15. The generator consisted of four separate and identical drawers, each equipped with a rotary switch for the erosion voltage and the current, which could be combined and gave the necessary current for the erosion process. On the front panel there was also an indicator, similar to a voltmeter, showing the stability of the whole process. Next to that indicator, another dial indicated the elapsed time, so that the total erosion time could be determined.

On the main panel, the following dials and indicators were placed:

Inside the cabinet, at the bottom, the power supply and the processing units for the two stepping motors was placed, along with several fuses and circuit breakers for the entire machine.